Theft is a strong word.

I prefer borrowed or inspired by or paying homage to. Sounds much better and makes me a better example to my unborn child and isn’t that what it’s all about? Well that and the Hokey Pokey.

So Heather was perusing Etsy for some nursery ideas. We have decided on a moon and stars theme with a lot of bright, primary colors. While looking for decor, she came across this cute prints 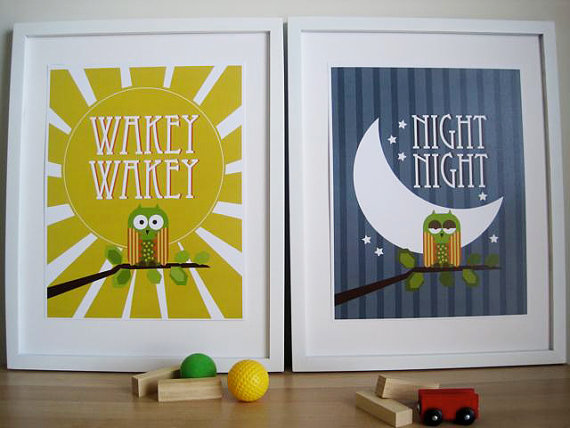 Being a graphic designer with a passing knowledge of Photoshop, I was inspired to both borrow and pay homage to the design by creating my own set of prints.

Full Disclosure: I was also trying to save some money

Since we live in Austin, I decided that a nice twist on the theme would be to change from an owl to a bat. For those not in the know, Austin is home to the largest urban bat colony in the world. Need more proof or just wanna see a the cutest little pest exterminators ever?

Now I know that bats are nocturnal (for that matter so are most owls) but I would rather explain that to a kid later on than have them sleepy sleepy every day and wakey wakey every night just in the name of accuracy.

I found some modern, simple white frames at Michaels and ordered poster-sized prints online. After some X-Acto’ing to cut the posters to fit the frames, along with some strenuous basic math and ruler work, I was able to mount the (mostly level) finished product in the nursery.

Shared from Dove Men+Care Three quarters of dads say they are responsible for their child’s emotional well-being, while only 20% of dads see this role reflected in media. It’s time to acknowledge the caring moments of fatherhood that often go overlooked. This Father’s Day, share the “Calls For Dad” film…