I feed the boy around midnight and am impressed with how quickly he drains the bottle. Mama is at work and I really need the little man to give me the gift of an easy night. I get a quick burp out of him and bounce him on the yoga ball until he’s fast asleep in my arms. The outlook for the night is looking up. I prepare for the tricky business of the transfer (from my arms to his crib) and feel like I am going to be successful. I lower him into the crib and the second he hits the mattress, he’s wide awake.

I let him roll around for a bit since he’s not really upset. I head to my bedroom and watch him on the monitor, hoping he will lock into a comfortable position and quickly doze off. There’s times when he’ll be still for an extended period and I hold my breath hoping that it sticks. It does not.

I head back in to his room and scoop him up. Once again we bounce on the yoga ball and once again he quickly slips off to sleep. This time, I wait a little longer. This time, I want to be sure. It’s well after midnight now and I’m starting to add up in my head just how much sleep I can still salvage. With steel resolve, I attempt to lower him into the crib. Once again, he is instantly wide awake upon impact.

This time he’s whining, so I pick him up right away and prepare to begin the process anew. If I didn’t know any better, I would be convinced that he was purposely messing with me. But I do know better. I know that he’s just a baby and is just going through a thing that babies go through. It still enters my mind though, and I feel like there’s a twinkle of understanding in his little baby eyes.

I take some deep breaths and prepare to start anew. We repeat the ritual and though it takes a little longer this time, he finally relaxes and eventually closes his eyes. As I go to lower him into the crib, I smell that something is off. The slightly pungent smell of recently processed breast milk fills my nose and it slowly dawns on me that my baby has delivered a deuce. 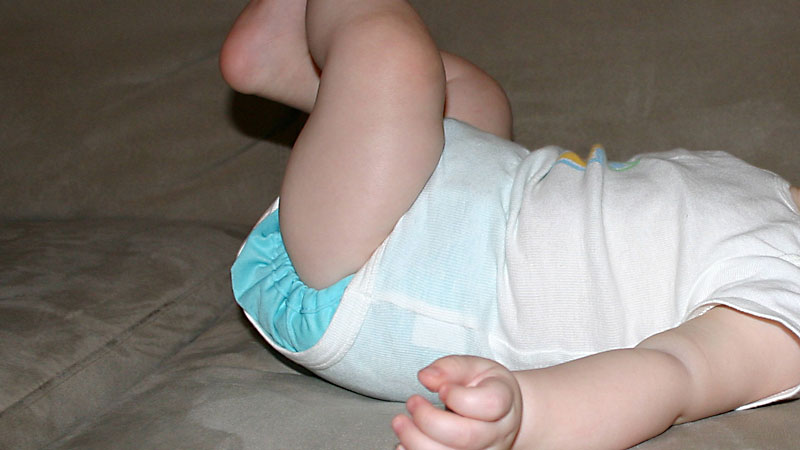 Hot ‘n ready, just for you!

Since he is almost asleep, I actually contemplate leaving him be. My stupid conscience gets the better of me though, and I bring him over to the changing table and try to change him without stimulating him too much. While changing a poopy diaper in a nearly dark room is tough, I’ve had 5 months to prepare for this and I feel that I am up for the challenge. There’s a catch though… It seems the little man has recently discovered his penis and he just loves to tug it to and fro during diaper changes.

After wrestling him into his new diaper and preparing him, once again, to go to sleep, mama texts me and asks how things are going. I use the swipe function to quickly send her back a one handed reply and then spend the next two minutes correcting all the mistakes the stupid phone auto corrected in the message. 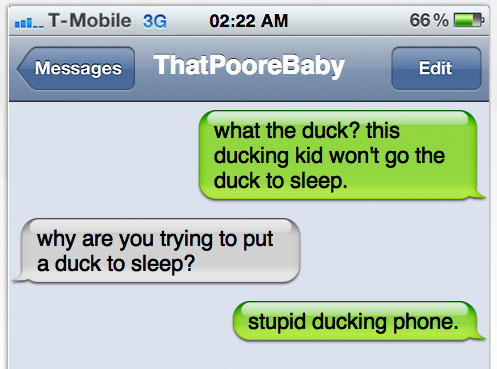 What the duck, phone?

Text sent, I prepare once again for a battle of wills against 18 pounds of stout determination. Thunderdome rules are in full effect: two men enter, one man leaves. After nearly two and a half hours, I finally catch a break as he decides that he’s had enough of me and he falls asleep.

The little dude is generous and gives me almost 3 hours of sleep before his cries yank me from my abbreviated slumber. Bleary eyed, I manage to make it down the hall without walking into too many walls. He’s on his belly with his head lifted high and gives me his “what took you so long?” look. I scoop the munchkin up and get him fed. On a whim, I decide to put him right back in the crib after I coax a burp out of him. Amazingly, he rolls to his side and relaxes.