Eons ago (translation: 2008), we lived in New Jersey. iPhones were a novelty, mySpace was a thing and our evening’s edutainment was Jeopardy. In short summary, Jeopardy (actual name is Jeopardy! but that is obnoxious) is a game show where the answers are given and the contestants have to ask the questions. It is hosted by uber-douche Alex Trebek, who says “sore-eee” in his Canadian accent, and then looks down incredulously on everyone who answers incorrectly.

We liked to play along but often we had to pause the game in between answers to work out the questions. We always looked forward to the weeks when they held the teen tournaments because it was far easier, therefore, we felt way smarter. Besides judging the contestants, we felt like Trebek was also judging us. Did I mention that he acts like an uber-douche?

I believe that he was nicer before he shaved his mustache, but more on that later.

When we moved to Austin, we were devastated to learn that Jeopardy airs at 4PM in these parts. As our new lives in our new home became busier, the trivia section of our brains slowly filled with cobwebs and our limited knowledge of history, geography and potpourri no longer had an outlet. We even began to miss our smug pal Alex.

Now that we have a baby, we try to eat around 6PM so that we can get him to bed at a decent time. A few years ago we cut cable, so our choice of early evening entertainment consisted of network news or another gameshow called Family Feud. Network news is depressing so, Family Feud it was.

While not as mentally challenging as Jeopardy, Feud still requires some thought as you have to figure out what the average person would say versus what you think the answer should actually be. The premise is simple: Two families battle it out by correctly responding to a survey question that was asked to 100 people. The show is often made more entertaining by the interaction between the host, Steve Harvey, and the family members.

I’ve never been a big Steve Harvey fan but he does a really good job in this format. The amazing thing, though, is how much the little dude responds to Steve. I don’t know if it’s the mustache, the shiny head or a combination of the two, but Popeye loves him some big Steve.

I know what you’re thinking: It’s TV, of course the little man is interested. But here’s the thing, he normally doesn’t give three shits about what is on the TV. He’ll go about his daily tasks of repeatedly emptying every cabinet in the house or trying to destroy his toys, but when the Family Feud music starts, he’ll always stop what he is doing and will look up at the TV. When Steve walks out, he will smile. 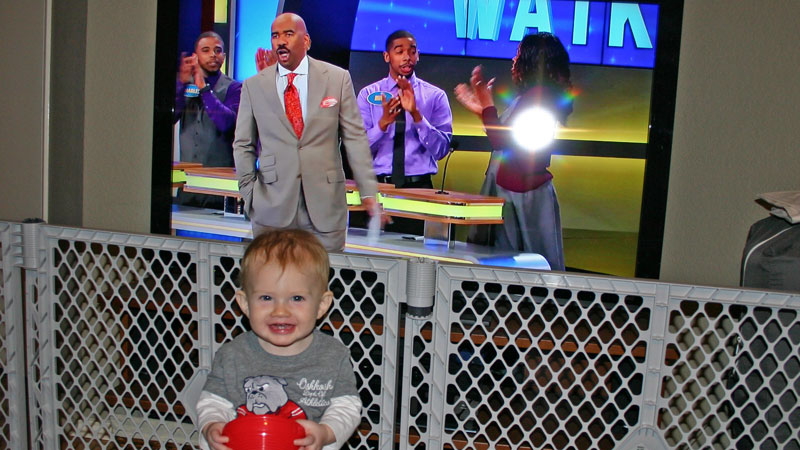 Maybe this is normal. Perhaps Steve exudes some sort of kid-friendly charisma that is intoxicating to pint-sized kids. Personally, I think it’s the mustache and it makes me wonder what the allure would be if Jeopardy was on at 6PM, instead of Feud, and Trebek still had his fancy facial hair.

But alas, Alex shaved and Jeopardy is long over when our dinner time rolls around, so we shall never know. What I do know is that currently the little dude is emptying the cabinet next to me and I just found out that the Game Show Network replays old episodes of Family Feud, like, all the time.

Steve Harvey to the rescue!

This was not the original plan. Mama had wanted to visit a third-rate amusement park deep in the outskirts of North Austin. The plan seemed strong: Get there before the triple digits attacked and before the little man was ready for a nap. Somehow, we got out the door and…