Disclosure: I received my Little Tikes Sizzle n Serve Grill for free with the understanding that I would review it here. All of the words and opinions in this review are mine, however, and have not been biased in any way.

We’ve been in Austin for seven years, and since being here, the area has been in a drought. In fact, 2011 was the hottest year ever recorded – it reached 100 degrees for 90 days during that summer. The other years have been hot as well and have had their share of sweltering heat. My lawnmower usually has cobwebs on it by August.

That’s not going to be the case this year as it’s basically been raining all spring. It has been reported that May of 2015 is now the wettest single month on record for all of Texas. April and May are normally the best times to be outside and to enjoy things like hiking, visiting parks and going to outdoor events. It’s also the best time for grilling in the backyard, with Memorial Day being the unofficial start of the grilling season.

When Little Tikes sent me a Sizzle n Serve Grill to review, I initially planned to let the little dude check it out during Memorial Day weekend. Those plans got washed away with the rains as we received over a foot of rain during the holiday. This weekend looks much better though, so it’s time to get to grillin’. 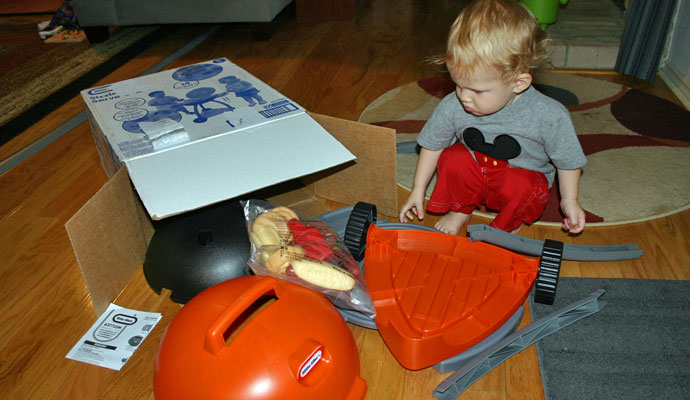 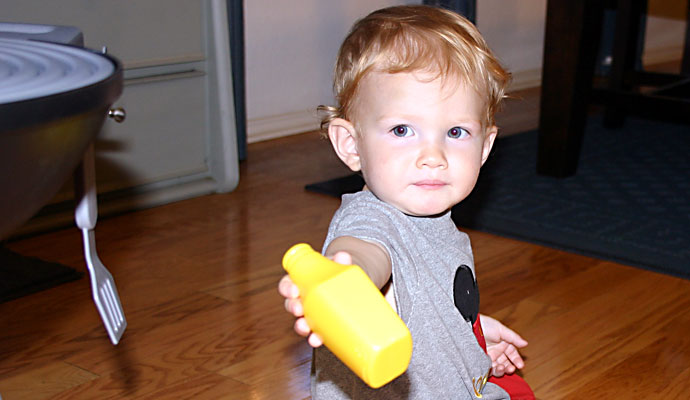 I’m a Texan and we put mustard on our burgers. 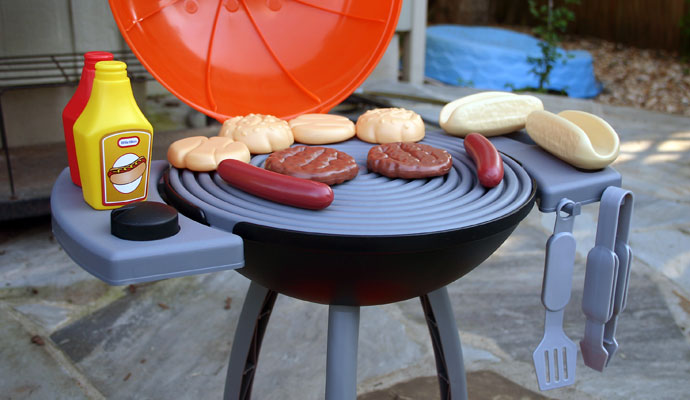 In pristine condition, right before we unleashed the little man 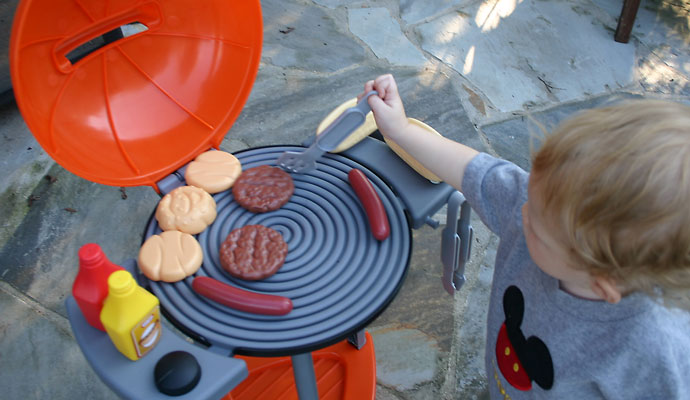 How do you like your burger dad? Your choices are from the grill or off the ground. Strike that, off the ground is the only viable option.

The little man had a blast playing with the grill while I prepared dinner on the grown up version. He’s still a little younger than the recommended age (2+), so his hand eye coordination isn’t quite there yet. He can handle holding the utensils but doesn’t have the dexterity to do anything more than slide the food around, so at this point his favorite thing to do is to furiously knock the food off the grill with the spatula.

Overall, the Little Tikes Sizzle n Serve Grill is a great way to include the little one while grilling outdoors with the family. It’s also compact enough for indoor fun. This durable toy easily snaps together with no additional tools needed and features an easy open lid, sturdy wheels and a bunch of accessories:

Here’s your chance to get one for free! Good luck!

Overall, the Little Tikes Sizzle n Serve Grill is a great way to include the little one while grilling outdoors with the family. It's also compact enough for indoor fun. This durable toy easily snaps together with no additional tools needed and features an easy open lid, sturdy wheels and a bunch of accessories.

When we were in the pregnant stage of babydom and were making some of the big decisions on how we were going to proceed, mama said she wanted to use cloth diapers. Now in my mind, cloth diapers were literally pieces of white cloth that you folded origami-style into a…