Disclosure: I received my Newton Crib Mattress for free with the understanding that I would review it here. All of the words and opinions in this review are mine, however, and have not been biased in any way.

The little dude has had sleeping problems that go all the way back to when he was still in mama’s belly. We should have known then, when he would kick non-stop, that he would never quite get the hang out of sleeping through the night.

The early days were especially tough as he would wake up every few hours and usually have to nurse to get back to sleep. Since mama works nights, that meant lots of pumping, lots of bottles and very little sleep.

Nowadays, things have improved and he normally wakes around two and finishes the night in bed with us. We’ve had a few magical nights were he has lasted until around six and a few where he only makes it a few hours. For the most part, though, two in the morning is his jam. 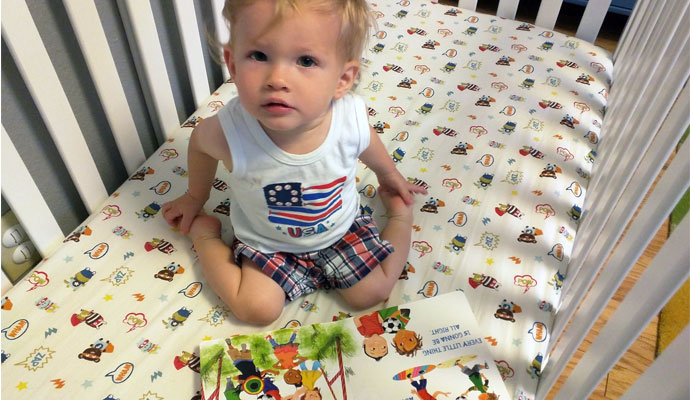 We began this journey with the standard two-in-one crib mattress. You start with the hard side and switch it over to the less hard side once your baby is older. I say less hard because neither side of the mattress is particularly comfortable and I have often wondered if the mattress is at least partly to blame for his (and inevitably our) sleeping problems. 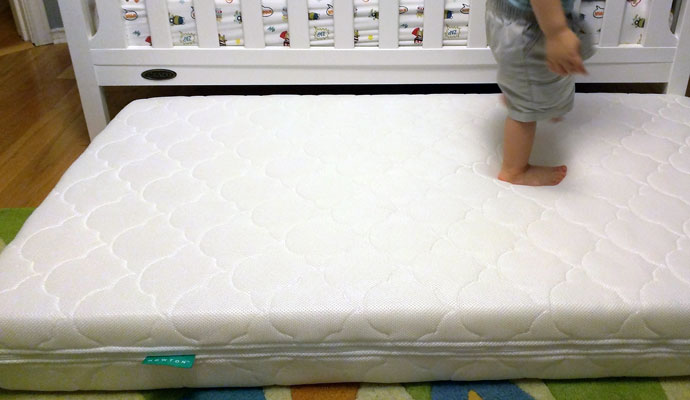 The Newton Crib Mattress features a core made out of Wovenaire instead of foam, latex, springs and glue. This means that it is free of allergens and toxic chemicals. What exactly is Wovenaire? According to Newton:

Wovenaire technology was invented in Japan and is now made in the USA. Highest quality food-grade polymer is extruded into a crystal clear pool of water, creating a unique, resilient three-dimensional shape that is 90% air by volume.

Another amazing feature is that the entire mattress can be washed in a washing machine (on cold) to keep things clean. 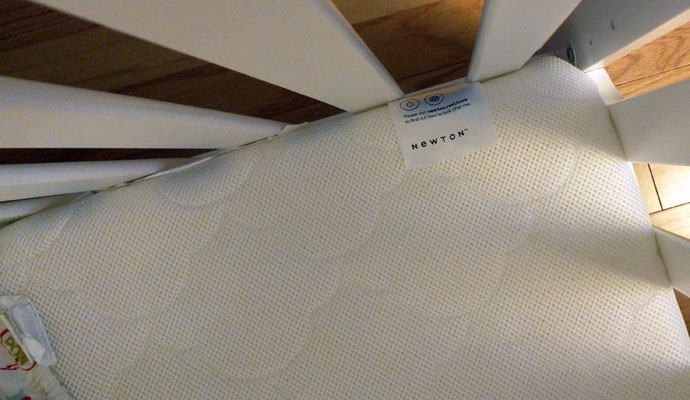 So how did the little man do on his new mattress? We’ve had it for a few weeks now and I am happy to report that he is lasting longer and longer in his crib. Sure there have been some hiccups, mostly due to a cold and the awesomeness that is teething (and then that one extra special night when he was teething with a cold). For the most part, though, he has been sleeping pretty solidly until three or four with a few nights pushing six.

On one particularly troubling night when the little dude just did not want to go to bed, mama actually climbed into his crib with him until he fell asleep. Once he was calm and she had deftly egressed the crib (twas impressive), she reported that the mattress was incredibly comfortable. That kind of begs the question, when will there be a Newton mattress for us non-babies?

Overall, The Newton Crib Mattress is a comfortable and lightweight sleep solution. It features a breathable Wovenaire core, which makes it both safer and healthier than standard mattresses. It requires no off-gassing and is free of toxins, 100% recyclable, hypo-allergenic and washable. The Newton is made in an emissions free facility and has received Green Guard Gold certification.

Watch That Poore Baby try out the Newton

Newton knows that your baby’s safety comes first and they also know how much you want to give them the right start in life. As experts in the area of sleep, Newton knows just how important good sleep is for both of you. This is why they have devoted their time and expertise to create a crib mattress that is not only safer, but also more comfortable.

Overall, The Newton Crib Mattress is a comfortable and lightweight sleep solution.

When you want to learn how to do something, one of the best things that you can do is to consult an expert. Someone who is highly respected in the field in which you would like to improve your knowledge. Parenting is no exception, so when I need some advice…