Who knew that babies were constantly changing little buggers that can shift so dramatically from one day to another? So much so, that you seriously entertain the theory that someone broke into your house during the night, and all they did was switch out your kid with a clone that acts completely opposite of the one they replaced.

And it happens every few days.

In the beginning, Popeye would sleep anywhere, at any time and pretty much for as long as we wanted him to. It was a glorious time and we stupidly thought it would be like this until he left for space college. But alas, it was not to be, and as he became more aware he became more of a fussy pants .

Nowadays, it’s all about the timing. If you try to initiate nap time too soon, he will fight you with the wrath of a thousand storms. If you wait until he’s overtired, then you are doomed to spend eternity in sleep purgatory.

Then there’s the gotcha nap. This is when you’ve found that perfect sweet spot and gotten him to relax. His eyelids are getting heavy and he’s all wrapped up and looking content. Outside, the birds are softly singing, there’s just enough cloud cover to filter the glare from the sun, and there’s a gentle breeze that makes the trees pleasantly rustle. You excitedly wonder if this is going to be a 30 minute nap or, if you hit the jackpot and will get the fabled 2 hour snoozapalooza.

It’s all for naught when 10 minutes later a blood curdling scream emanates from the general direction of your napping offspring.

Recently, the little man has gotten enamored by the little green night light that we have plugged in next to his temporary sleeper (that has become a permanent fixture in our bedroom). It’s located on the wall behind him and it’s actually adorable to watch him try to figure out how to view it from his normal sleeping position.

It also plays the same songs that are in every baby toy (read: songs in the public domain) and every time Fur Elise is on, I cannot help but sing the words to Classico from Tenacious D. I have a feeling Popeye’s first word is going to be a curse word, so thanks Jack Black for that.

A visitor to this site (see, you’re not the only one!) sent me a really nice homemade night light for Popeye’s nursery. It’s crafted out of cherry hardwood, uses low watt LEDs and is sealed to keep inquisitive little fingers out of trouble. It’s really put together well and if you are interested, you should check them out at his Etsy shop. Note: I received mine as a gift with no requirement to review it and I receive nothing if you buy one (except maybe some good karma, which is actually pretty sweet). 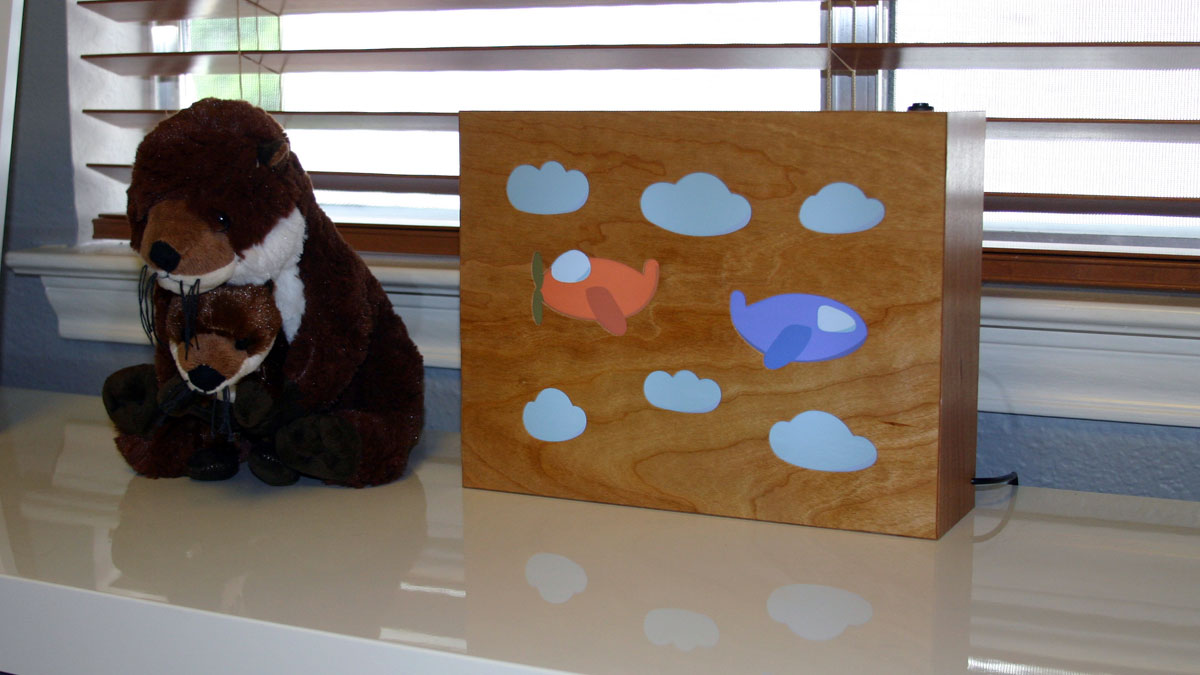 Would you believe it’s only $14?!? (info on the origin of the River Otter here)

So anyways, playing the nap lottery is a lot like playing the instant win lottery. You begin with a level of optimism bordering on lunacy, and even though everything is stacked against you, you feel like this is the one. This is the time you defy the odds and win the big one. As you venture forth and things start to look bleak, you hope for a miracle. Usually though, you just end up with some unidentifiable shit on your fingers and a realization that you never had a chance. Just don’t smell your fingers.

But those times when everything works out and the baby naps like a champ? They may be the one asleep, but you are the one living the dream. When it happens, you have to enjoy it to the fullest and most importantly, you have to be ready for when they wake up. Because when they do, they usually do something awesome.

It may be the year of the horse in China but in this particular house in Austin, it will most definitely be the year of the poo. Seeing that we’re taking the natural approach to childbirth by using a birthing center and midwife, it stands to reason that we are…